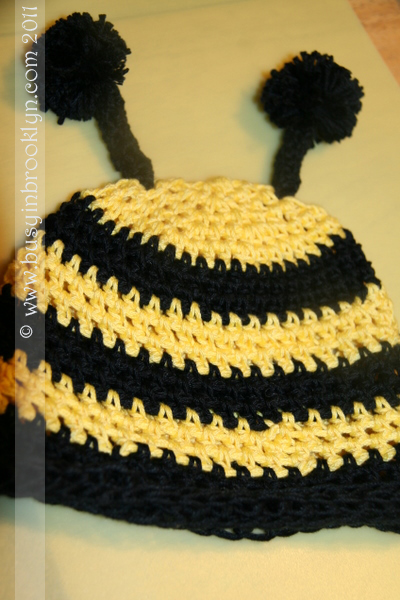 I like to look out for good deals on costumes during the post-Halloween season. I found these adorable bee costumes for my girls on Carters.com, and I just had to buy them.

After having a baby recently, I realized I would need a matching bee costume for him too. But instead of spending the money on a bunting outfit that would probably be hot and uncomfortable, I decided to crochet a bee hat, and just dress him in all black. With Purim soon approaching, I ordered black and yellow yarn, and crocheted the hat a few days ago. I love how it turned out!

Fitting Note: at this point, the circumference of your hat will be approximately 14″ (fits my 3 month old perfectly). If you want to make the cap larger, add another round of HDC here, increasing every 5 sts. You should have a total of 48 hdc.

ch 2. 4 sc into first ch. sc around for 6 rows. Pull on tail to stretch and form a cord.
repeat for the second antenna.
Create two small pom-poms and attach to antennas.
sew the antennas to the top sides of the hat.