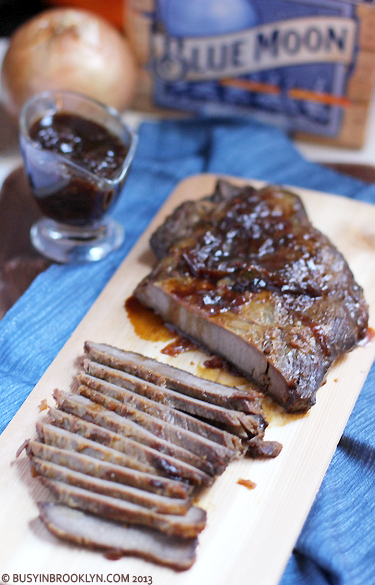 This post has been a long time in coming. And not just because it’s taken me a while to write it. But because it’s taken me a while to learn it. Like many home cooks, when it came to meat preparation, I was stumped. I didn’t understand the different cuts of meat or how to prepare them. After lots of reading, and a hands-on butchery class at The Center for Kosher Culinary Arts, I feel like I’m finally beginning to understand where my meat comes from and how to cook it. With the holidays upon us, I thought I should share some of that invaluable information with all of you!

So, without further adieu, I give you my Guide to Kosher Meat: Cuts & Cooking Methods! 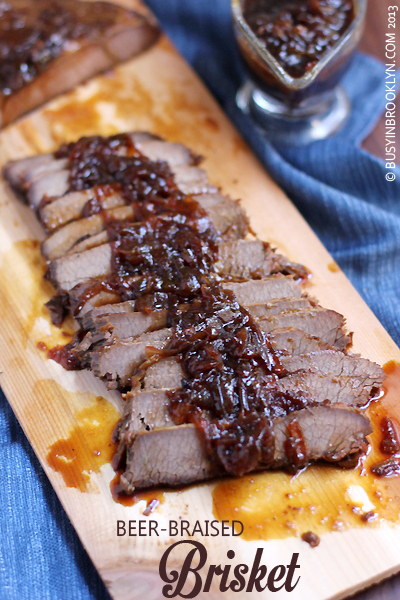 In my guide, I speak about the different cuts of meat and where they come from on the animal. In a nutshell, tough cuts of meat requires slow, moist heat cooking to help break down the connective tissue and tenderize the meat. Braising, a combination cooking method involving dry and moist heat cooking, is a popular method used.

This deliciously tender brisket is braised with caramelized onions and beer, resulting in a mouthwatering gravy. First cut of brisket will yield a drier, less flavorful dish, while 2nd cut will yield a more tender flavorful meat. If you choose to use 2nd cut of brisket, don’t remove the excess fat until it’s done cooking. As the fat breaks down, it adds moisture and flavor to the meat, so if you want to remove it, it’s best to do so by refrigerating the meat after cooking and removing the congealed fat after it solidifies. In addition, cutting the brisket when it’s cold, minimizes it’s propensity for shredding.

Keep in mind, that since braising is the best method for cooking tough cuts of meat, you can use any tough cut in this recipe such as the French Roast, Chuck Roast, Shoulder Roast, or Deckle.

Season your  brisket with salt and pepper and sear in an oven-safe pot over high heat on all sides. Set the meat aside. Add some oil to the pan and saute onions, picking up the little bits from the bottom of the pan as it cooks. Add brown sugar, salt and pepper and cook over medium-high heat until onions are golden, sticky and caramelized (about 25 minutes). Deglaze the pan with a bottle of beer. Add vinegar and brisket to the pot, cover tightly and bake at 325 degrees for 2 hours. Turn the brisket over and cook until fork-tender, 30 minutes-1 hour (or longer, use a fork to check tenderness).

Once cooled, remove the brisket from the pot and slice thinly against the grain. Serve with onion gravy.

TIP: If the gravy needs thickening, let it cook uncovered over high heat until it reduces to desired consistency. Adjust seasoning, if needed.

VARIATION: for more flavor, you may add some fresh rosemary, thyme or dried bay leaves.

NOTE: For a larger brisket, cook for an additional 30 minutes – 1 hour per lb, until fork tender. Add additional beer, if necessary, so that 1/3rd of the meat is covered in liquid. 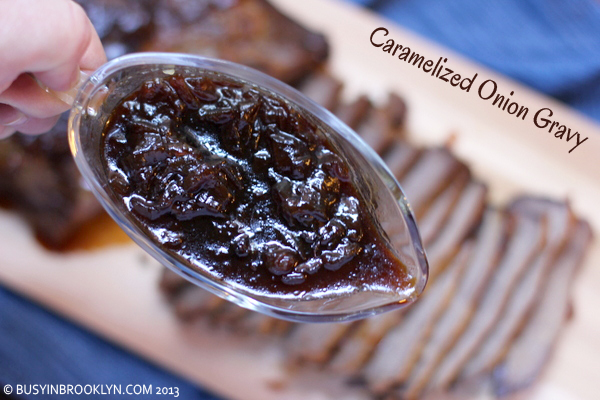