On June 25, 2012January 14, 2015
by chanie
in Appetizer, Dinner, Lunch, Pasta, Recipes, Side Dish, The Nine Days
39 Comments on Shlishkes (Gnocchi with Toasted Breadcrumbs) 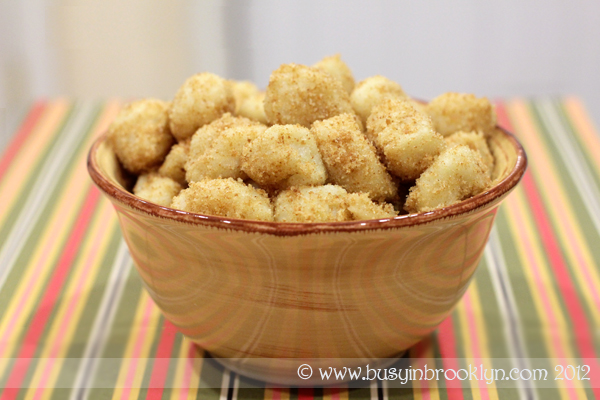 Being of ashkenazi descent, I grew up eating many traditional Hungarian dishes like kraut-pletzlach (noodles and cabbage), holopches (stuffed cabbage), as well as shlishkes (potato dumplings rolled in toasted breadcrumbs). My mother would make shlishkes on occasion, but I hadn’t eaten it in many years. We were reminiscing about it the other day, so I decided to give it a try. The idea of making a pasta-like dough seemed intimidating, but it was actually quite easy. Rolled in toasted breadcrumbs, these soft potato dumplings are sure to please any palate, ashkenazi and sephardi alike! You can also use this recipe to make gnocchi, and mix it with your sauce of choice (marinara or pesto are good options).

When I looked up my family recipe for shlishkes (which I’ve lightly adapted), I found something interesting. After the instructions for preparing the dough, it said, “take challah.” I would never have imagined that I would need to set aside gnocchi dough for hafrashas challah! After doing some research, it seems as though one would not need to “take challah” for dough that uses only 1 1/2 cups of flour (the original recipe used more). If you’re interested, you can read more about it here.

Scrub potatoes to remove dirt and boil until fork tender. Once the potatoes are cool to the touch, peel them. Mash the potatoes very well*, or if you have one, push them through a potato ricer or fine mesh sieve. While the potatoes are still warm, place them into a mixing bowl and add egg, salt and flour. Mix the ingredients and knead with your hands until a soft dough is formed. Add additional flour if necessary. On a floured surface, and with floured hands, roll out a handful of dough into a long strip. Cut the strip into 3/4″ pieces. If desired, roll the dough over (or under) a fork to create ridges. Bring a large pot of salted water to a boil. Working in batches, drop pieces into the water and let them simmer until they float to the top. Remove with a slotted spoon. In a separate pan, melt margarine or heat up oil. Add bread crumbs and stir until browned and toasted. Add gnocchi and toss until coated.

* If you don’t mash the potatoes really well, you’ll be left with large lumps of potatoes in your dough.

1 year ago: salad nicoise and other shalos seudos ideas