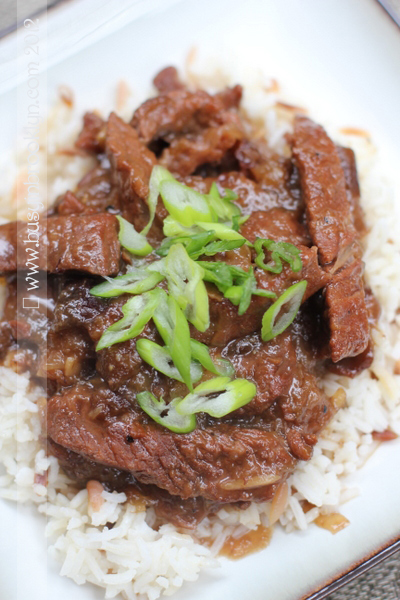 As the song goes, it’s “back to life, back to reality.” While Pesach was a wonderful opportunity to spend time with family and friends, there’s something nice about getting back into a routine. Not to mention, being able to eat chometz again!

One of my most favorite chometzdik dinners is a dish my mom makes with pepper steak and plum jelly. She found the gourmet jam in Australia, and every time she visits, she brings home a jar. I decided to try and recreate her recipe without the jam, and I think I came pretty close!

It took me a while to learn how to make pepper steak that didn’t taste like I was chewing rubber. I learned, first and foremost, that good pepper steak has to be quality pepper steak. The better the quality of the meat, the softer it will turn out in the end. The second thing I learned about cooking pepper steak is to cook it low and slow. The longer the steak simmers, the longer the meat will tenderize. Lastly, I learned to add the sauce at the end, so that the sugar in it does not burn and harden the meat.

Have you got any tips for making your pepper steak soft? I’d love to hear them!

Saute pepper steak in a bit of oil until browned. Remove from pan. Add onions and garlic and saute until golden. Return meat to pan, remove pits from plums and add them, with their syrup, to the pan. Season with salt and pepper. Bring the mixture to a boil, reduce heat, and simmer for 1-2 hours. Uncover the pot, add hoison sauce and cook on high heat until reduced by half, about 20-30 minutes.