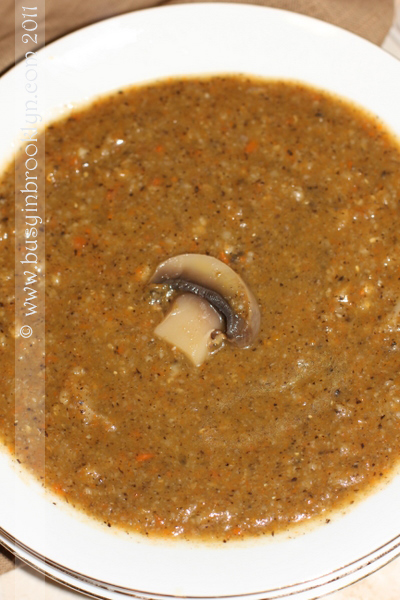 I remember the first time I made mushroom barley soup. I was having a large group of people over for a simcha and I decided to whip up a batch of the hearty soup. Having never made it before, I underestimated how much the barley would expand. Lets just say it was more of a cream of barley soup than a mushroom anything. I have since learned my lesson and to be sure of myself, I cook the barley separately and add it the soup once it’s already tender.

But that’s not the only thing that makes this soup anything but average. Instead of serving up a bowl of soup with a puddle of grease floating on top (you all know what I’m talking about), I blend the soup using only half of the barley. Since my kids wouldn’t normally eat mushrooms, blending it makes for a perfect disguise and they don’t have to miss out on this delicious recipe. After blending, I add in the remaining barley for added texture in every bite.

Add leeks to a bowl of water. Agitate the rings with your hands and mix to loosen sand and grit. Drain leeks and dry on paper towels.  Saute leeks, onions and garlic in olive oil. When they begin to golden, add carrots and then mushrooms. Saute for 5 minutes (add thyme if desired). Add chicken stock, soy sauce, salt and pepper and bring to a boil. Add half of the cooked barley and simmer until vegetables are tender, about 15 minutes. Using a tongs, remove some mushrooms to use for  garnish. Then, blend the soup with a hand blender. Add remaining barley and simmer for 20 minutes. If the soup is too thick, add water until desired consistency is reached. Garnish with mushrooms.

NOTE: To cook barley, add to a pot with 5 cups of water and bring to a boil. Reduce heat, cover and cook until tender, about 30 minutes. Drain.