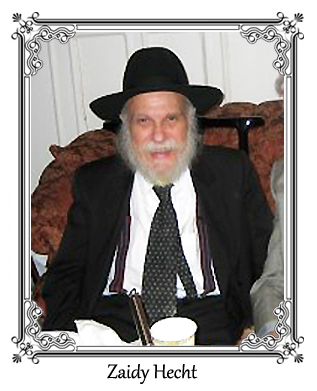 While my blog is mostly about food, it’s also so much more than that. My recipes and crafts are an expression of who I am. I could not imagine letting this week go by without sharing with you someone who has had a huge impact on my life and is so near and dear to my heart.

This past Saturday night, on the eighth night of Chanuka, the world lost a special soul. My Zaidy, Rabbi Peretz Hecht, passed away. Zaidy was a 3rd generation American, a real Yankee. Growing up in Williamsburg, he had a serious Brooklyn accent, and commonly used genuine New York slang. He was affectionately called “Daddy” by his children. My grandfather was an extremely hardworking man, but he always found the time to learn Torah. From when I was very young, I remember his dining room table covered in holy books. When Zaidy would learn, he never did so superficially. Each and every sentence was analyzed and questioned. I would watch him sitting with my cousins passionately arguing over every single word in the Gemara. “You gotta fight with the Tosfos!”, he’d say excitedly.

In the late 1960’s, Zaidy opened a printing business, working tirelessly to support his family. When the digital era evolved, his dated printing services were no longer needed, and he went out of business. He returned to his passion for Torah, tutoring Yeshiva boys one on one. Over the years, I’ve met countless bochurim who were lucky enough to learn with my Zaidy. His love, care and understanding touched each and every person he encountered.

My Zaidy was so full of life. He loved to live, and enjoy the good things. Bubby would always try and coax him to eat something healthy, but even in his old age, he would always have his eye on the candy (halva was his favorite!). He had a real passion for music. I’ll never forget when I returned from seminary, my family was in the middle of moving, so I spent the summer months in my grandparents’ home. Each Shabbos, Zaidy and I would sing his favorite tunes. He would sing with all his heart and soul, the melodies rising straight to the heavens. I will forever cherish those moments we shared together.

I never met anyone who could give a bracha like my grandfather. Whenever I went to visit, Zaidy would give me a lengthy blessing. He always got terribly emotional, his voice rising at the end, pleading “Tate zeeseh in himmel, we need Moshiach, let him come already!”

While Zaidy was serious about his learning, he also had the most amazing sense of humor. Whenever he’d get up to speak at family gatherings, he would have everyone laughing until they cried. And then, he would cry. And cry. He just had a way with people, especially young children. They were drawn to his gentle spirit and his smile that could light up a room.

Zaidy was a no-nonsense kind of person. He knew what he meant and he meant what he said. His sincerity was felt by all who knew him. But with all his qualities, humility was Zaidy’s biggest virtue. As a young girl, I remember thinking that my Zaidy was one of the Lamed Vav Tzadikim Nistarim. I was so in awe of his bittul and love for Torah. Over the past few years, Zaidy suffered through a terrible illness that ultimately claimed his life. It is a comfort to know that he is no longer suffering. I have no doubt that his neshama is making it’s journey to the highest realms of Gan Eden.

There is no one like you Zaidy, you will truly be missed! Your legacy lives on in your children and grandchildren. I hope we continue to make you proud!