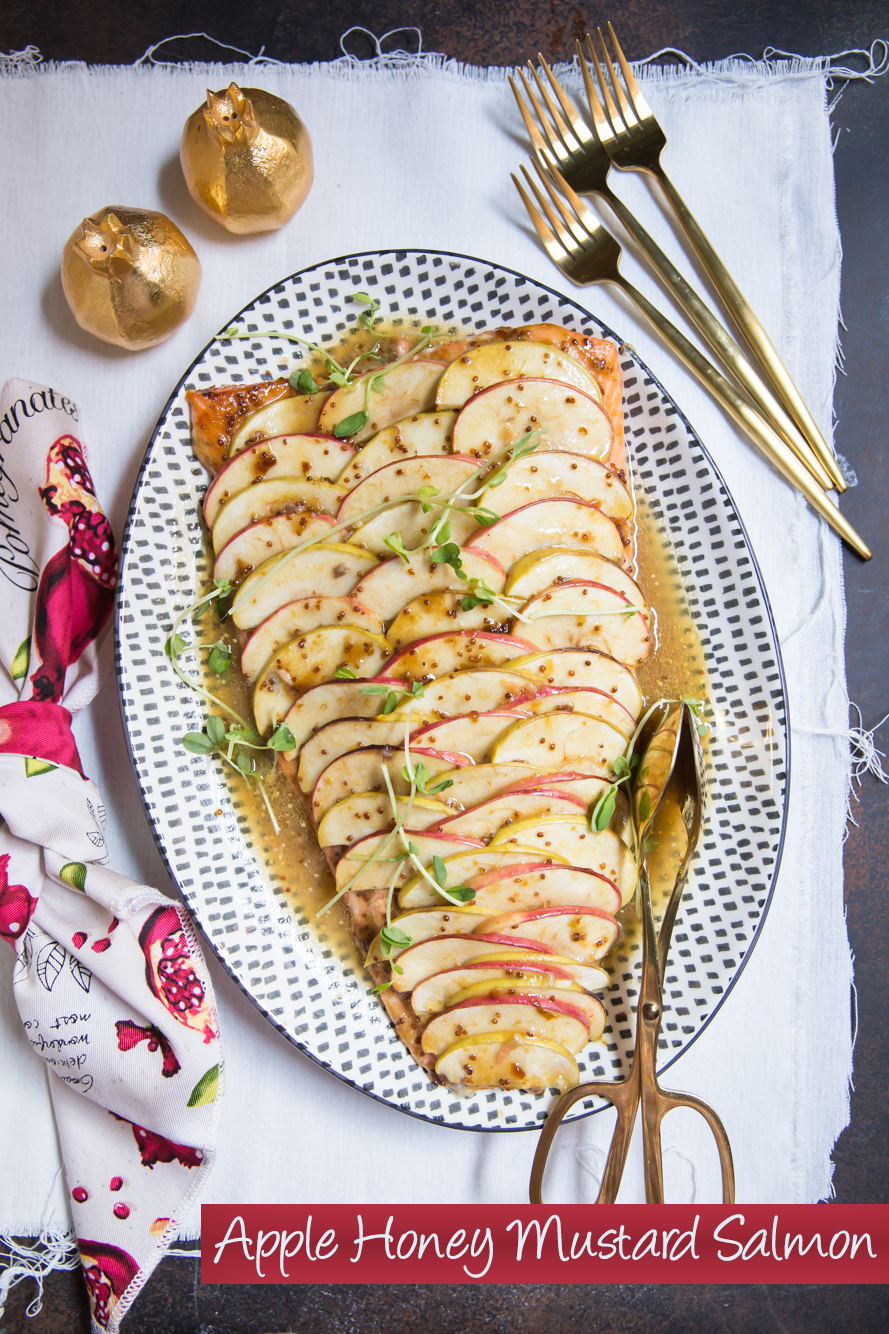 This recipe came to me last week when I was preparing my salmon and I’m so glad it did because it’s JUST. SO. PRETTY!! I definitely have a thing with decorating a side of salmon, and I love how the apples resemble fish scales! 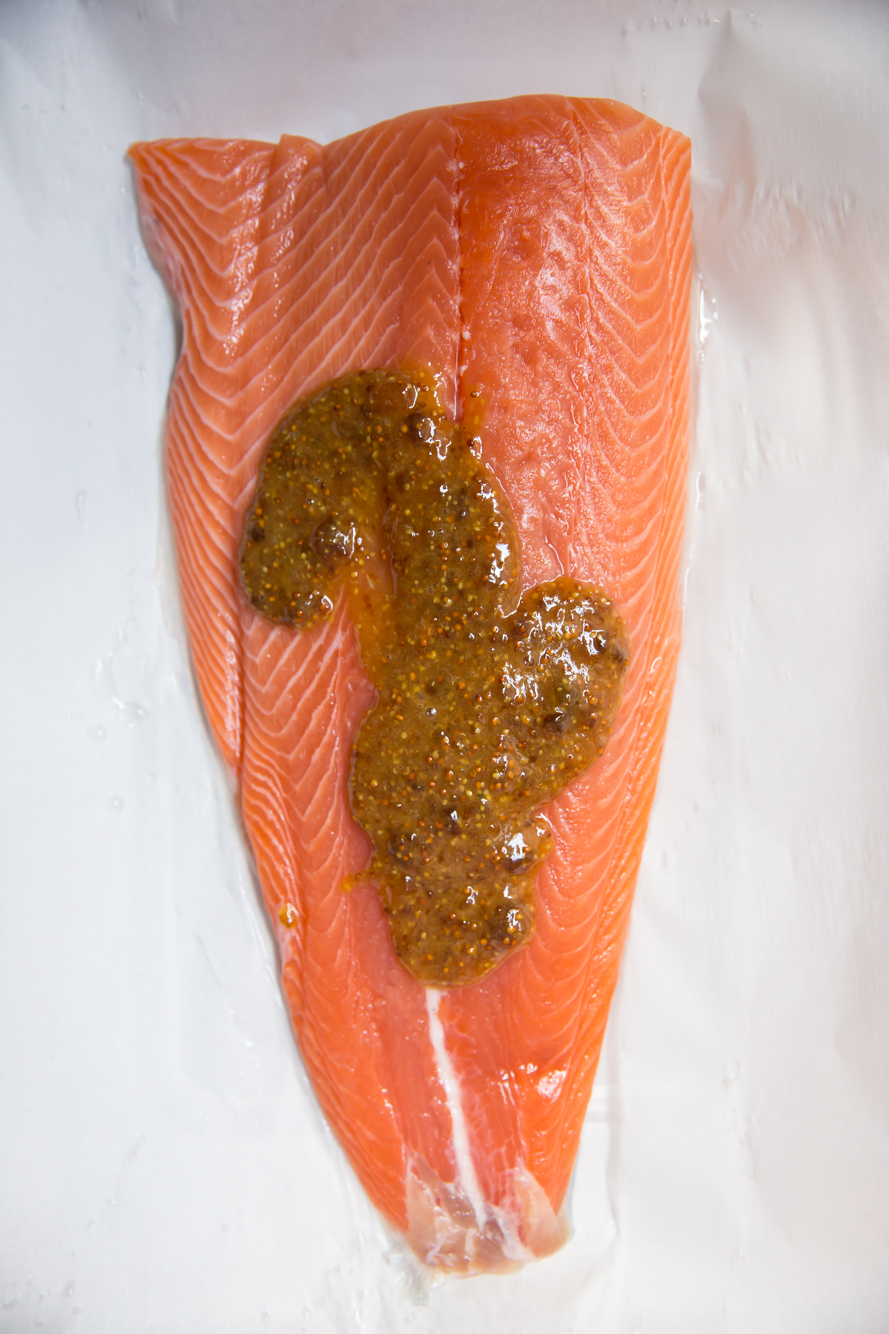 I think a memory a lot of us have of Rosh Hashanah from our childhood is that moment when the fish head was brought to the table and WE. HAD. TO. EAT. IT.!! It always smelled awful and that fish eye just stared at us, as if to say, you killed me and now you’re going to have to eat me!!! I still have nightmares from those fish heads. Nightmares!!! 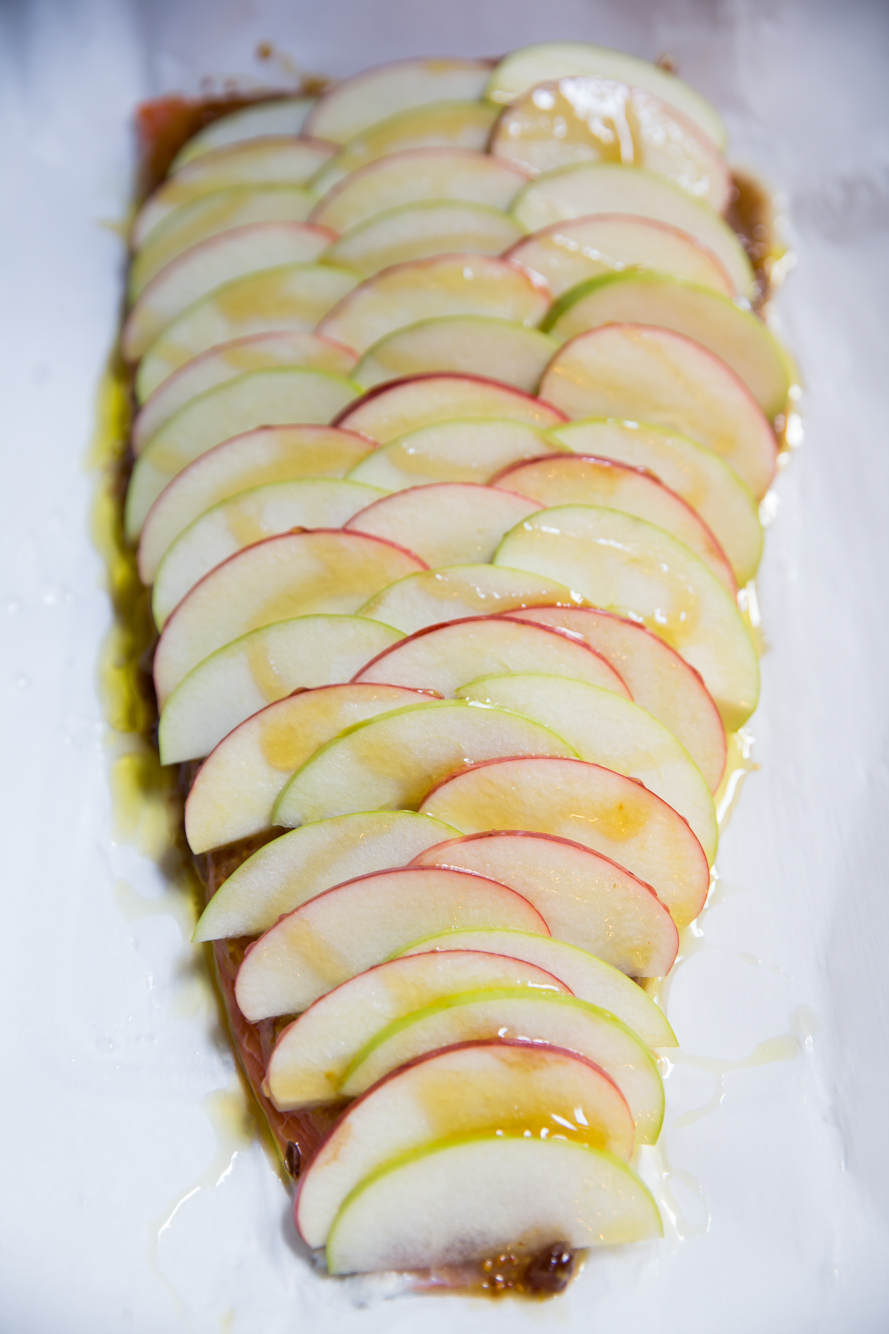 When people ask for recipes for the fish head, I usually just tell them that no recipe is going to make anyone want to eat it so just throw tons of lemon on it and stick it in the oven! Most of the fish stores have been storing the fish heads all year, so they’re definitely not fresh, and you can smell it a mile away. I don’t know what’s worse, the eyeball staring back at me or the smell coming out of it! 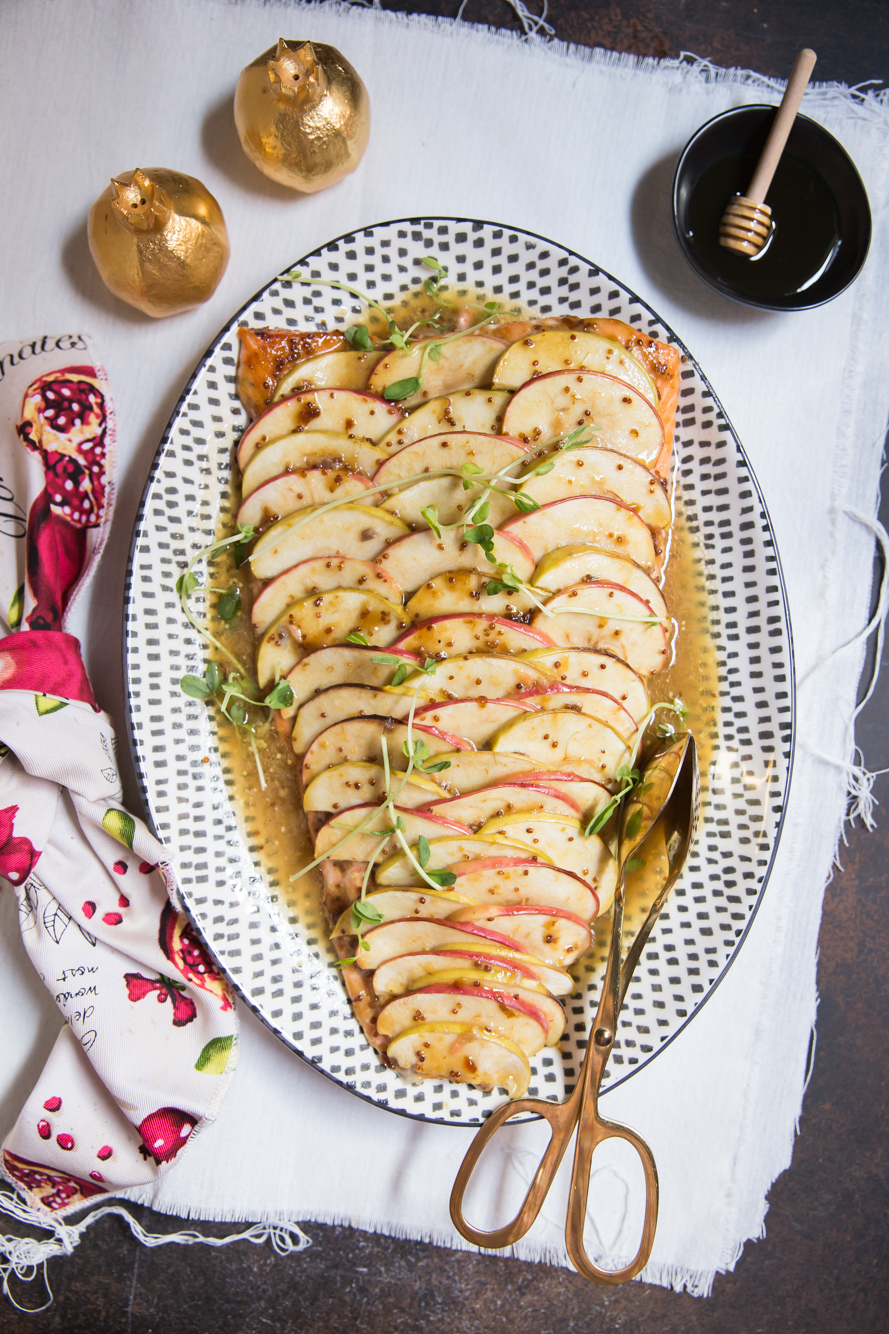 That’s the thing about fish that people don’t realize – it really should never smell like fish! It should smell like the ocean. If your fish smells fishy, it’s probably not fresh and it will probably taste fishy after you cook it. Moral of the story – BUY FRESH FISH. And don’t try and get fancy with your fish head ‘cuz nobody wants to eat it anyway. 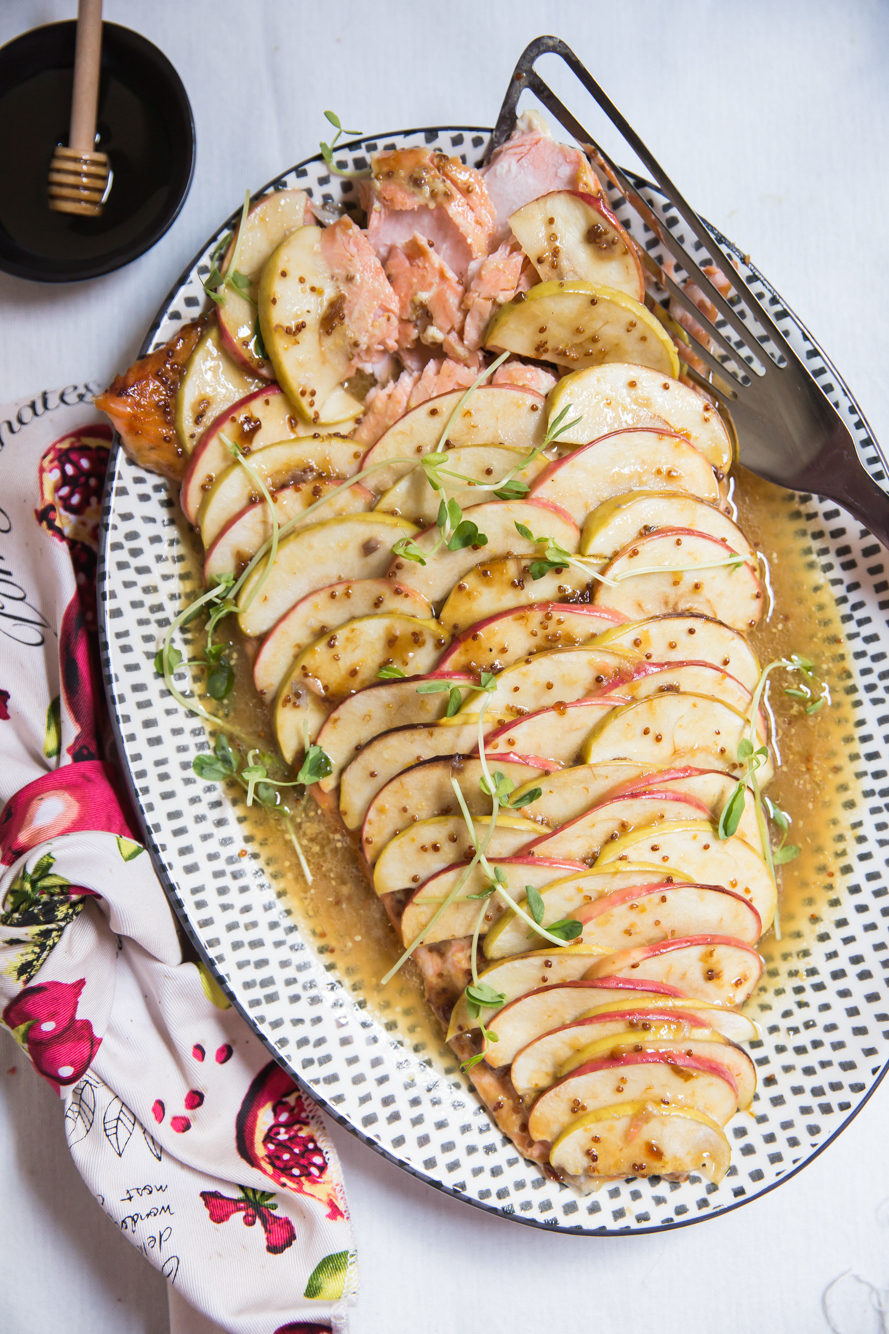 But this here? This is the fish that you WANT to serve. It’s the dish that everyone is going to OOH and AHH over. And you’re going to be feel like a gourmet goddess for pulling it off. At least, until, we pass the fish head around! 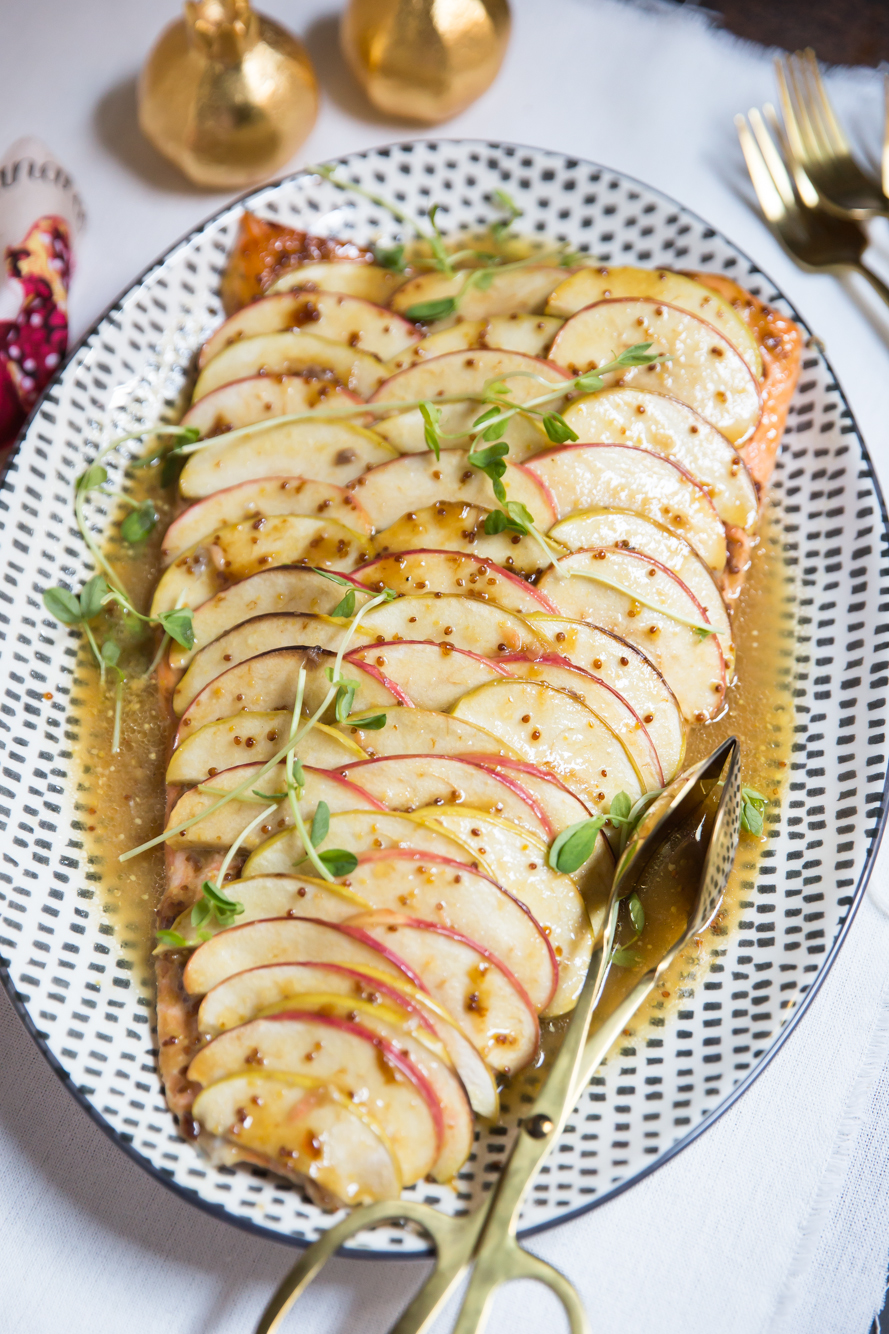 May we all be blessed to be like the head, and not the tail this year!

Preheat oven to 400 degrees. In a small bowl, combine the apricot jam, mustards, honey, salt and pepper. Brush the mixture generously over the salmon. Decorate the salmon by overlapping the apples, alternating between red and green until the salmon is covered. Drizzle with olive oil, lemon juice and honey. Bake, uncovered for 25 minutes, basting once with the pan juices during cooking.

Serve warm or at room temperature.

NOTE: I prefer this recipe served fresh, but if you want to prepare it a day ahead, you can serve the next day at room temperature (reheating cooked salmon tends to make it fishy and dry).