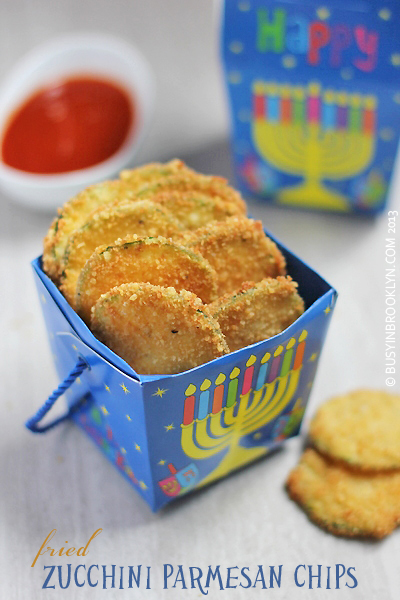 A couple of months ago, a bunch of kosher bloggers and I went out to celebrate the anniversary of The Kosher Connection (a group that we formed that presents monthly challenges to kosher food bloggers). We all met at Siena’s, a dairy Brooklyn restaurant on Kings Highway to have some fun and enjoy good food. And that we did. One of the first things they served us were crispy tempura-fried zucchini chips with marinara sauce for dipping. Those chips were completely addictive and being pregnant at the time, I repeatedly craved them throughout my pregnancy! 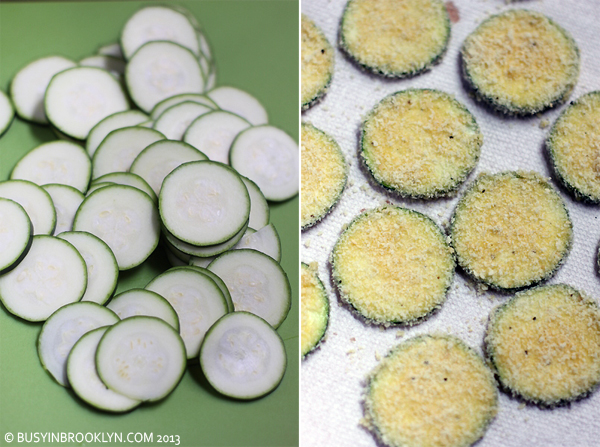 Fast forward a couple of months later and I’m craving those chips again. With Chanukah in mind, I decided to try a breaded version, with some parmesan mixed in. Eating fried foods on Chanukah is a well known custom (to commemorate the miracle of the oil), but eating dairy is as well. We do so to remember the bravery of Yehudit, a young widower who lived in Bethulia in the land of Judea. To save Jerusalem from a paralyzing siege and approaching enemy troops, Yehudit seduced a Greek general into a drunken slumber by feeding him salty cheese and quenching his thirst with strong wine. As the general slept, she beheaded him with a sword. After finding that their general had been killed, the Greek army fled in disarray. 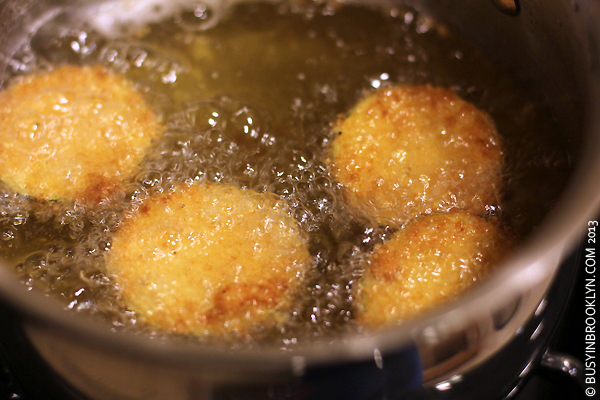 So not only do we gorge ourselves on fried doughnuts and chocolate gelt – we also add dairy to the mix to really tip the scales! Thanks to the zucchini in this recipe, you get to deguiltify the whole deep-fried thing altogether! Which reminds me… 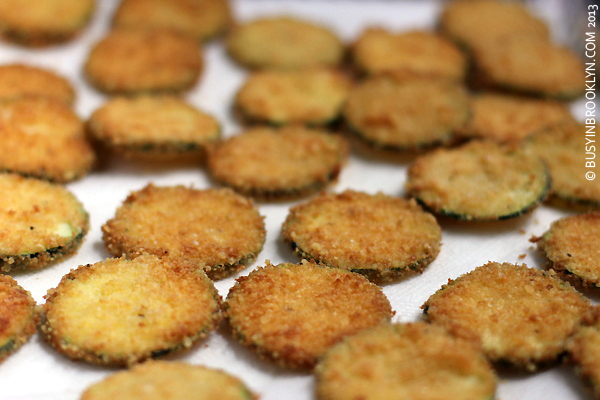 I made these zucchini chips on a Wednesday morning. I remember because right after they came out of the fryer, I went out to pick up the New York Times. You see, I’m not much of a newspaper-reading gal, but on Wednesdays, the paper includes a fantastic Dining supplement and I just have to have it. To my amusement, the front page of the Dining Section was dedicated to the art of deep frying. It read, “Deep Fried and Good for You.” Talk about deguiltifying. 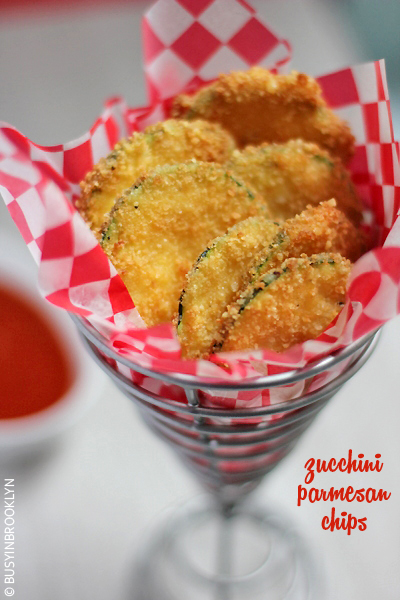 In the article, Mark Bittman reasons that deep frying is not all that bad for you, since fat is actually good for you. He concedes that not all fats are created equal and continues on to reject the notion that olive oil is inappropriate for frying. Since most deep-frying is done at around 350 degrees, and olive oil smokes at 375, it’s a fine option, he says. 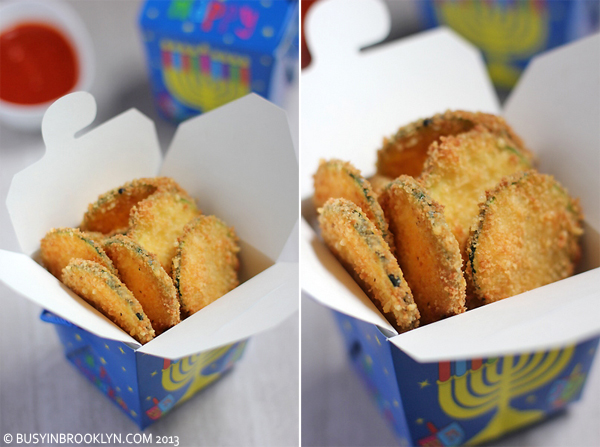 I turned the page to continue the article and found that Mark had included a recipe for fried zucchini sticks, similar to the chips I had just made. “Mark says they’re good for you,” I told myself as I continued to eat the whole pan (did I mention I was pregnant?!).

Using a mandolin or knife, slice the zucchini into approximately 1/4″ rounds. Prepare your breading station by placing separate bowls of flour, egg and panko mixed with parmesan. Season each bowl with salt and pepper. Dredge the zucchini in flour and shake off to remove excess. Repeat with egg and then panko-parmesan mixture. Heat 2-3 inches of oil in a saucepan to 350 degrees*. Place a few pieces of zucchini into the hot oil. When the zucchini begins to brown on one side, flip it over to brown the other side. Remove with a slotted spoon or spider and drain on paper towels.

*If you don’t have a deep fry thermometer, you can test the temperature by adding a pinch of flour to the oil. If it sizzles immediately, the oil is ready.

VARIATION: try this recipe with eggplant, asparagus, green beans, or any veggie of your choice.

NOTE: If you prefer to bake these, place the breaded zucchini rounds on a greased cookie sheet, spray with cooking spray and bake at 450 degrees, for 15 minutes per side, until browned and crisped. 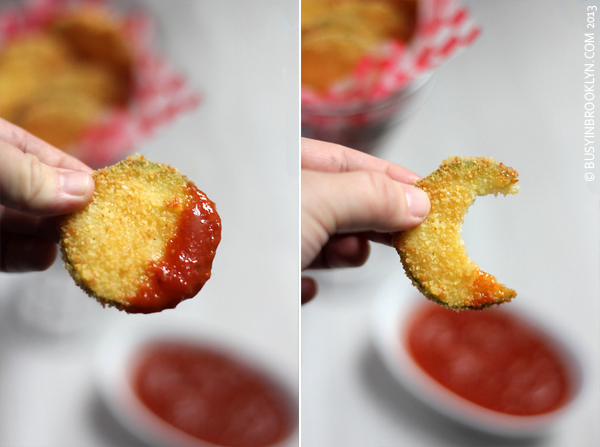