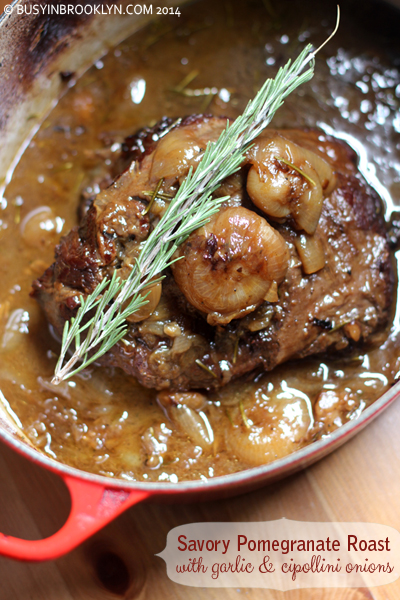 I’m not really one of those people that goes into the butcher knowing what type of roast I want to make for the holidays. I just look for what’s on sale, or which roast is going to give me the most bang for my buck and I take it home. Once you understand the basics to purchasing and preparing kosher meat, you don’t have to feel stuck on a certain cut and you can feel free to choose.

It was a few days before Rosh Hashanah when I unwrapped my square roast, wondering how I would prepare it. I had so many sweet side dishes that I wanted to go for something savory – but I also wanted to play on the Jewish New Year concept. I decided to work with pomegranate molasses – a tangy condiment that’s made by reducing pomegranate juice, and pair it with savory ingredients like garlic, onions and rosemary. 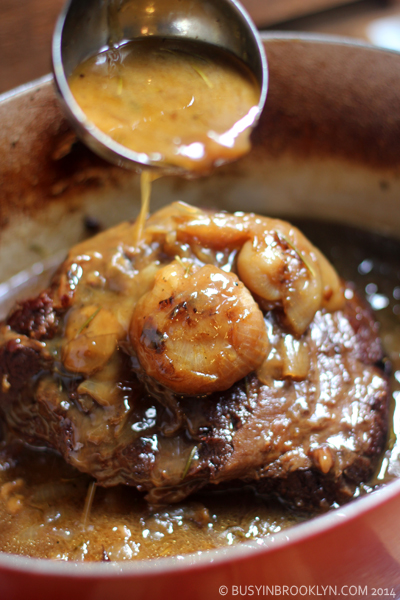 When you’re preparing a new recipe and testing it on a roast, it’s always a guessing game on just how tender it’s going to turn out. I usually like to use wine or tomatoes to help tenderize my meats, but I was shocked to see how soft and buttery this roast came out without it. It was so tender, you could eat it with a spoon! And the gravy – oh my! It was thick and delicious, with a hint of tang, filled with creamy pieces of garlic and cipollini onions that practically melted into the sauce. I’d definitely call this a winner, and that’s why I’m posting it! Chag Sameach!

3-4 lb. Square Roast (a cut from the Chuck – you may substitute with French, Brick or Chuck Roast)
salt and pepper, to taste
2 tbsp olive oil
8 large cipollini onions, peeled (use more if they are small)
10 cloves of garlic, peeled
3 sprigs rosemary
1 1/4 cups beef or chicken stock
1/2 cup pomegranate molasses (I use Sadaf Pomegranate Concentrate)

Season the meat generously with salt and pepper. Heat the olive oil in a dutch oven or oven-safe pot and sear the roast on all sides. Remove from the pot. Add additional oil, if needed, and saute the cipollini onions, until browned and caramelized in spots. Return the roast to the pot and deglaze with stock. Add garlic, rosemary and pomegranate molasses and season with salt and pepper. Bring the mixture to a boil, cover the pot, and bake at 300 degrees for 2 hours. Turn the roast over and bake for an additional hour.

NOTE: You’ll have plenty of gravy, so feel free to serve this alongside mashed potatoes.

FREEZING: This roast freezes beautifully. To freeze, wait until the roast is completely cool and cut into slices. Double wrap the sliced roast in foil, label and freeze. Pour the gravy into a large container, label and freeze. The night before you’re ready to serve, place the roast and gravy in the refrigerator. Before serving, place the sliced roast in a pot or pan and pour gravy over it. Cook on the stovetop, or in the oven, until heated through. 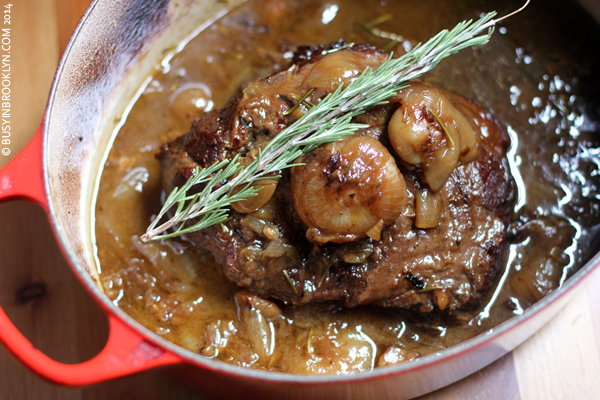 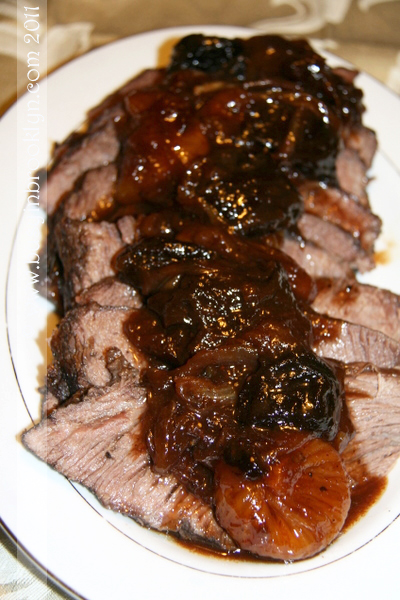 A Yom Tov meal, especially a regal one like Rosh Hashanah, deserves a dish fit for a king. In this recipe, a French roast is braised in red-wine with jewels of dried fruit reduced in it’s sauce. I can’t think of anything more festive or delicious for a chag in which we coronate Hashem as our king!

Method: Saute onions in olive oil until golden, set aside. Season the roast with salt and pepper and sear on all sides (see tip). Pour wine into pot and scrape up any bits and pieces from the seared meat. Return onions to the pot and spread around the meat. Bring wine to a boil over high heat. Simmer, uncovered, for 1-2 minutes until the alcohol evaporates. Cover the pot and cook for 1 1/2 hours over low heat. Turn over meat, add dried fruit and season with honey, brown sugar, cinnamon and nutmeg. Add 1/2 cup water and simmer for 30 more minutes. Remove meat from the pot, and cover with foil to keep warm. If needed, continue to simmer the dried fruit until the sauce has reduced and thickened, about 30 minutes. Slice roast against the grain and spoon sauce over meat before serving.

TIP: Searing the roast seals in the juices resulting in meat with a nice brown color and moist flavor. For a good sear, make sure the pan is nice and hot. Once the meat is browned, turn over and repeat. Hold the meat on it’s sides using tongs, so that every edge is covered.

NOTE: For a larger roast, increase cooking time (in the beginning, before you add the dried fruits) approximatley 30 minutes-1 hour per lb.

FREEZING: This roast freezes beautifully. Slice it first so that it’s easier to thaw and freeze it separately from the dried fruit.

UPDATE: 9/1/2014: While I used to simmer my roasts over a low flame, I have learned over time that gentle cooking in the oven is best. You may use an oven-safe pot and place in the oven at 350 degrees for the 1 1/2 hour cooking time. Turn over the meat, add the dried fruit and seasoning and return to the oven for 30 minutes (or more, if roast is larger than 2 lbs.). Remove the roast from the pan and simmer the sauce until thickened.