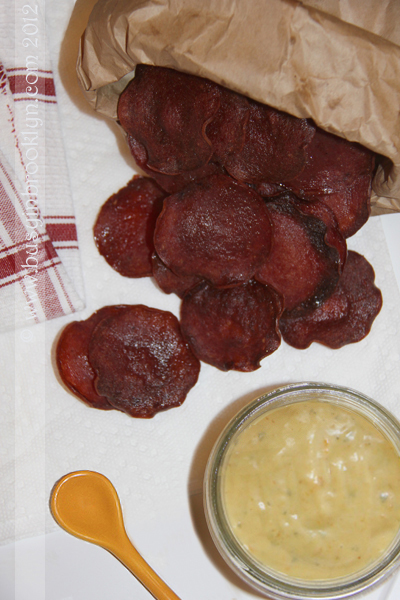 Funny story. When I was growing up, my mother used to prepare salami sandwiches for my siblings and I every Friday afternoon. She would pack up our sandwiches, and we’d take them to the courtyard of our building to eat lunch. Little did she know, each week we’d head straight for our building’s incinerator and throw our sandwiches down the chute.

I tried to eat those sandwiches, I really did. But those hard white pieces in the salami just made me gag. Fast forward quite a number of years and I’m a married woman. I’m in the supermarket with my husband and he wants to buy, you guessed it, salami. I explain to him that in no uncertain terms am I going to put that stuff into my mouth. But he promises me that his preparation is so delicious, even I will eat it.

So we head home, and true to his word, my husband whips up sauteed salami that is not only swallowable, it’s pretty good. I mean, I’m not about to go crazy over it, it’s still salami, but I can see where some might enjoy it.

Now fast forward quite a few more years, and that same sweet husband who whipped me up a dinner of sauteed salami, bought me some amazing food magazines for Shabbos (I’ll take that over flowers any day!). Among them is the Real Simple magazine and it has a recipe for salami chips. Sounds intriguing. So I whip up a batch according to the magazine’s directions and they come out disgusting. Absolutely, horrendous. I play around with the cooking time and the oven temperature, and finally, after countless batches, I get it right!

Interestingly enough, I have read that salami is often eaten on Purim to commemorate the hanging of Haman (salami is also hung). Salami chips would make for a unique and tasty shalach manos, or, you can serve them up as an appetizer at your Purim seudah.

Preheat oven to 250 degrees. Place salami slices on a baking sheet and bake until crispy, about 25 minutes. When you see the salami begin to curl up around the edges, watch them carefully to make sure they don’t burn. As soon as you remove the salami from the oven, dab them with paper towels to remove some of the rendered fat from the top. Then, drain them again on paper towels.

Alternatively, you can make the salami chips in the microwave. Place salami slices between sheets of paper towel. Microwave for approximately 40 seconds, or until crispy.

For dipping sauce, melt the apricot jam in the microwave or on the stovetop. Crush the tarragon between your fingers. In a bowl, mix the mayo, mustard, apricot jam and tarragon. Serve alongside salami chips.

NOTE: To make salami chips, the salami needs to be thinly sliced and uniform.  You can purchase presliced salami from your deli counter, but I like to buy it whole and slice it myself. The only way to achieve this without an electric meat slicer is by using a mandolin. However, since the salami is soft, it bends as you try to slice it. My solution for this is to freeze the salami for several hours until it is almost completely frozen. Then slice it on the mandoline as you would a cucumber. You’ll get perfect, uniform slices every time.

VARIATION: For sweet and salty salami chips, combine 3 tablespoons dark brown sugar and 1 tablespoon water and melt in the microwave or on the stovetop. Pour sugar mixture over baked salami chips and stir gently to combine. Return chips to the oven and bake for an additional 5 minutes at 350 degrees.