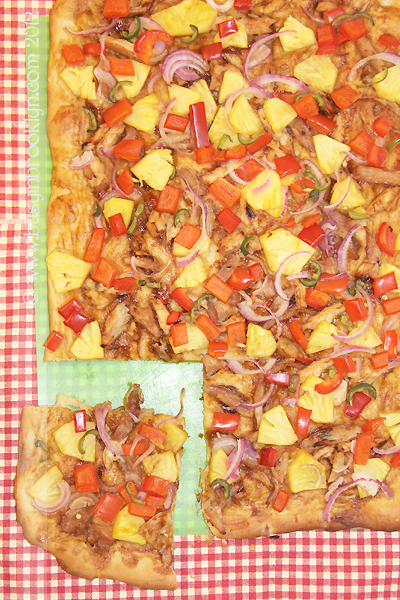 I’m not usually one for making yeast doughs. I mean, it’s not like I can’t do it, it’s just that I can’t be bothered. With all of the flour mess and sticky dough, I usually just leave it to the companies who prepare the frozen variety. This week, however, the rainy weather was a good excuse to play around in the kitchen. And my leftover hickory BBQ chicken was the perfect inspiration for this dish.

I have to tell you that with Fleischmann’s Pizza Crust Yeast, making the dough was super easy. There was no rising time. Simply mix, knead, top and bake. I don’t think I can go back to freezer pizza dough again!

Obviously, cheese on this pizza would probably be delicious but because I’m kosher, I have to leave it out. If you’re brave, you can try using soy cheese but personally that stuff freaks me out!

Preheat oven to 425 degrees. In a bowl, combine 1 cup flour, yeast, sugar and salt. Add water and oil and mix to incorporate. Gradually, add another cup of flour until a ball of dough is formed. Knead the dough on a floured surface, adding additional flour, if needed. Grease a cookie sheet with olive oil and using your hands (flour them, if necessary), press dough out to fill pan. Brush the dough with BBQ sauce.

If you have leftover pan-drippings from your chicken, mix it in to the shredded chicken to moisten it. If you don’t, mix in some diluted BBQ sauce (just add a bit of water to dilute) so that the chicken doesn’t dry out during baking.

Top the pizza with shredded chicken, pineapple, red onion, red pepper and jalapeno (for more heat, don’t remove the vein and seeds). Bake for 20 minutes, or until crisp.

NOTE: When prepared on a cookie sheet, the amount of pizza dough in this recipe yields a thin crust pizza. If you like a thicker dough, double the recipe.