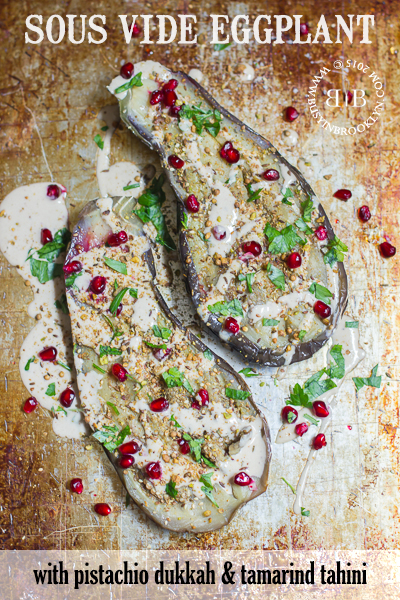 So I’m sitting on board a Jetblue flight en route to Florida, noshing on my Terra Blues, drinking a diet coke, and working on my blog post via (free!) Fly-Fi. We were lucky enough to score an empty seat, so my very active 23-month old (who’s on the last free flight of his life) is all buckled in and on his way to a white-noise nap. You gotta love Jetblue! 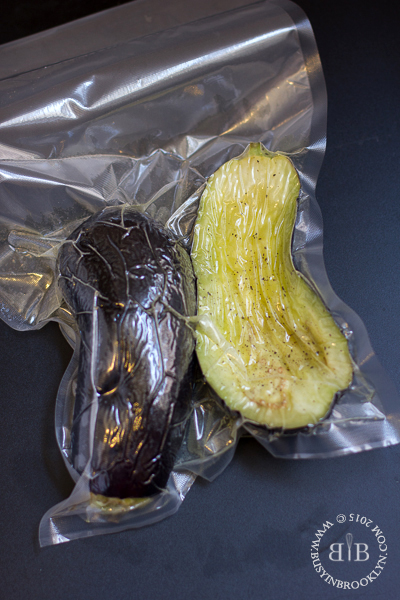 I really wanted to get in this last post before Sukkot because I started a trend a couple of years back where I post a STUFFED recipe in honor of Sukkot and the harvest festival. Traditionally, holipches/holishkes (stuffed cabbage) is served up on Sukkot because we want to celebrate the abundance of the harvest season. Fall is when farmers harvest their wheat in Israel, and stuffing vegetables with filling symbolizes their desire for a year of overflowing harvest. Any stuffed recipe is well suited to honor this custom, including my “ratatouille” mechshie, savory eggplant mechshie, globe zucchini mechshie and of course, stuffed cabbage! 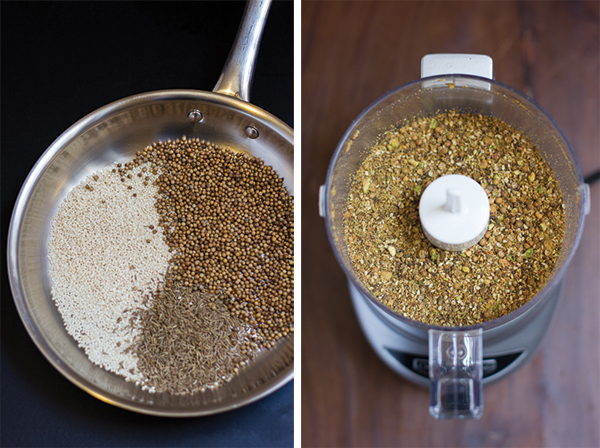 This year, I really wanted to take it up a notch, and since stuffing eggplant is one of my favorite things, I decided to give stuffed sous vide eggplant a try. I recently met a talented chef who was touting the benefits of sous-vide vegetables, and when he told me that sous-vide eggplant is literally soft as butter, I just had to give it a try! I had just got my new Sous Vide Supreme and what better way to use it than to test this technique! 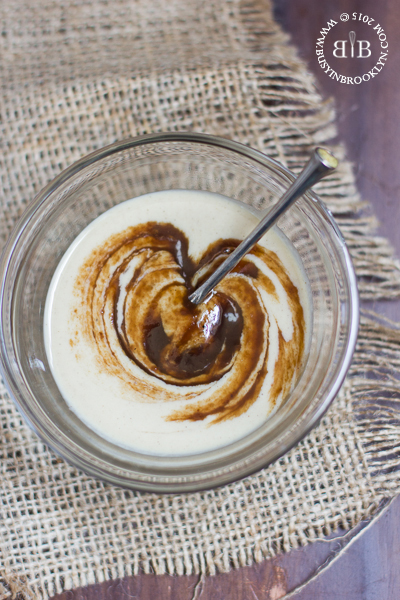 Truth be told, my first try at sous-vide eggplant was an #epicfail. The eggplant was tough and not altogether cooked and after some research, I learned that since veggies tend to float in the water bath, you need to weigh them down to ensure proper cooking. My second try was successful and the results were soft-as-butter-delicious! 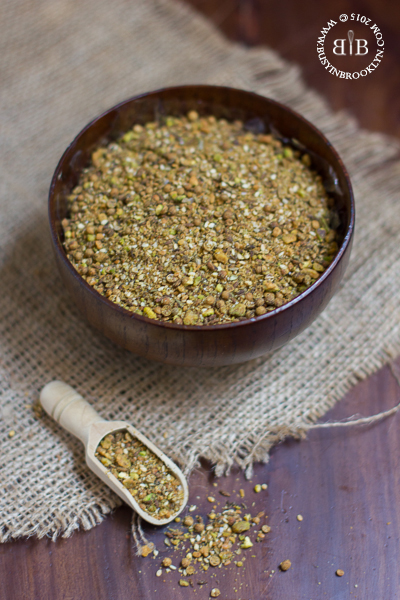 Now if you’re going to sous-vide eggplant, you have to have a sophisticated stuffing to match the modernist cooking technique. Roasted eggplants stuffed with Israeli salad is a regular in my house, as well as my
roasted eggplant parmesan, but as delicious as those recipes are, they are still homey comfort foods that wouldn’t do justice to my sous vide eggplant. I really wanted the eggplant to be the star, so I wanted to accessorize it, but not fully outfit it, to borrow some fashion terms :) 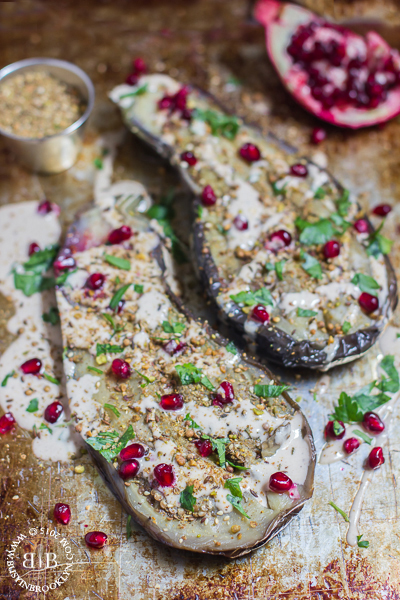 If we’re talking food fashion, there’s nothing more fashionable than nut and seed blends right now, so pistachio dukkah was just the thing! I recently did a #myspicerack spice roundup on my Instagram feed, and when I posted about the pistachio dukkah that my sister sends me all the way from Aussie, I got lots of recipe requests! I decided to make my own version from scratch with fresh cumin and coriander seeds from Holon, my favorite Middle Eastern market in Brooklyn. The results were incomparable to the blend my sister had been sending me. It was just so amazingly fresh, crunchy and and nutty, I don’t know why it took me so long to make my own! And you don’t even need a fancy spice grinder, a simple food processor works just fine! 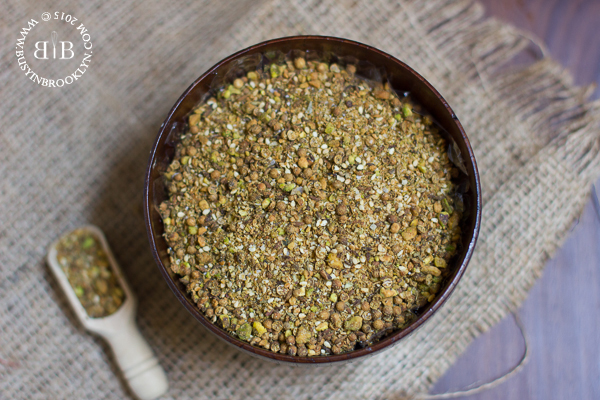 Now that my pistachio dukkah was done, I needed a creamy sauce to bring it all together, but just plain old tahini wouldn’t do the trick. After visiting the amazing tahini store in Shuk Machneh Yehudah in Jersualem, I knew that you could mix so many things into tahini – both savory and sweet, so I decided to go with tamarind. Tamarind paste is both sweet and sour, so it’s a great balance to the salty dukkah spice and sweet pomegranate seeds. Top it off with some chopped parsley and you’ve got it all – color, texture, and balance, just the way food should be. Happy Stuffing!

1 eggplant, cut in half lengthwise
2 tbsp olive oil
salt and pepper, to taste

Set the water bath of your sous-vide machine to 185 degrees.

Season the eggplant with salt and pepper. Fold the top of the vacuum-bag over itself to form a cuff. Slide the eggplant halves into the bag and add olive oil. Unfold the edge of the bag and vacuum seal.

Place the eggplant into the water bath and use the rack or a heavy dish to keep the eggplant from floating. For best results, make sure that the eggplant is fully submerged in the waterbath. Cook for 90 minutes.

OPTIONAL: For added smoky flavor, pat the eggplant dry and place flesh-side-down on a baking sheet. Drizzle with olive oil and broil until the skin is charred.

To serve, place the eggplant on a serving dish and sprinkle generously with pistachio dukkah. Drizzle with tamarind tahini and garnish with pomegranate seeds and parsley.

ROASTING (NON-SOUS-VIDE) OPTION: Place the eggplant flesh-side down a baking sheet. Drizzle with olive oil and season, to taste, with salt and pepper, Broil on high for 20 minutes, until skin is charred and the flesh is soft.

QUICK & EASY OPTION: roast the eggplants, sprinkle with pistachios and za’atar, drizzle with store-bought tahini and garnish with pomegranate and parsley. 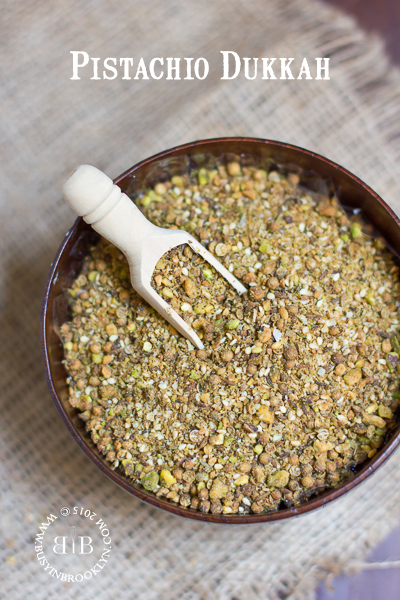 Pistachio Dukkah
Dukkah is an Egyptian spice blend made up of nuts, sesame seeds, cumin and coriander. You can add your own mix of spices to customize and make it your own.

In a dry pan, toast the seeds and set aside. Toast the pistachios and add to the seed mixture. Pulse the spice blend in a food processor until desired consistency is reached (I like it with a bit of texture). Add the thyme, oregano and salt. Store in an airtight container.

TIP: For long term storage, I recommend storing in the freezer as this keeps the nuts from going rancid.

Add all the ingredients to a bowl and whisk to combine. Store in an airtight container in the fridge. 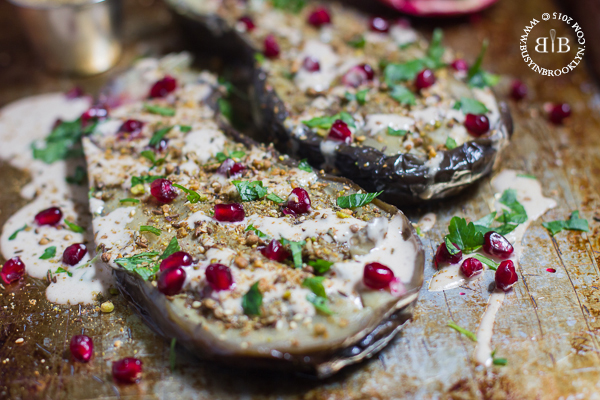 This post was sponsored by Sous Vide Supreme. All opinions are my own.