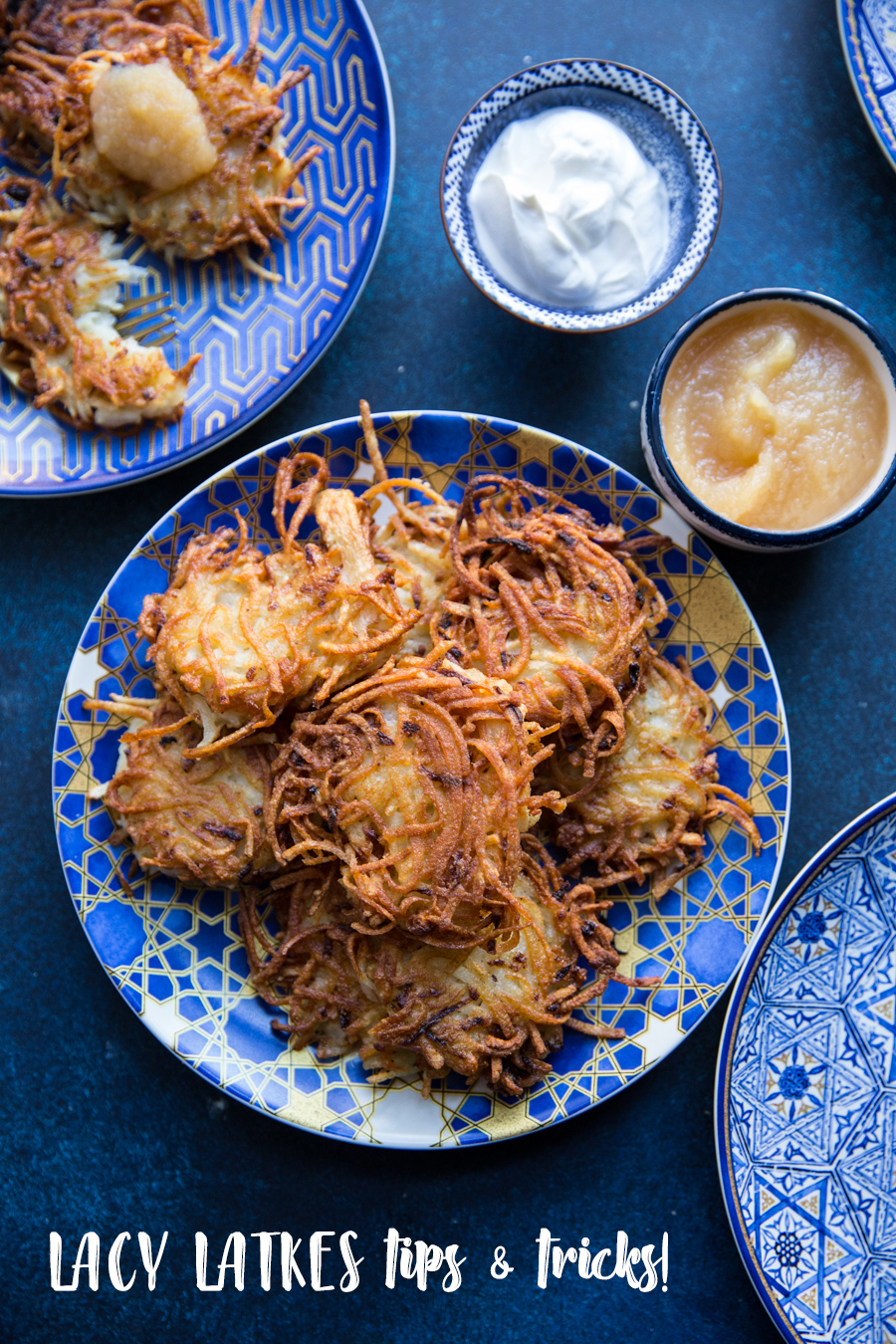 I’ll admit that I’m the first one to trash up latkes and have fun with them, but really, nothing competes with the classic perfect latke – if you get them right! There’s an art to the perfect potato latke, and I like to call them LACY LATKES for the shards of potato that crunch up between your teeth like crispy potato sticks! So how do you make these little bites of heaven? Read on!

• Use russet potatoes, they’re perfectly starchy!
• Place your potatoes in water until ready to grate so they don’t brown.
• Prep all your ingredients so that you can work fast!
• Alternate your potato and onion when you grate them, it keeps the mixture white!
• Grate your potatoes from top to bottom (or sideways in the food processor) for longer strands of potato = lacy edges!
• Squeeze your potato/onion mixture as dry as you can! Squeeze into a bowl so you can reserve the starch.
• Once the starch settles to the bottom of the bowl, discard the remaining liquid, and add the starch back in to the latke mixture for extra crispiness!
• Use a heavy bottomed skillet or cast iron pan.
• Add a carrot to your oil, it will keep it clean!
• Use plenty of oil, and get it nice and hot before adding the batter.
• Use a 1/4 cup measuring cup to scoop out the batter and flatten it out with the bottom of the measuring cup, so the edges spread out.
• Don’t overcrowd your pan, give the latkes plenty of room so they don’t steam.
• Leave the latkes alone! Don’t touch and let them develop a good crust! Flip and give the other side some time too!
• If the latke mixture starts to get soggy, give it a squeeze before adding it to the pan.
• Place the latkes on a rack set over a baking sheet to keep them crispy.

So you’ve made the perfect latke, now how do you top them? I put a Questions box on Instagram and here are some of the fun toppings that came in! 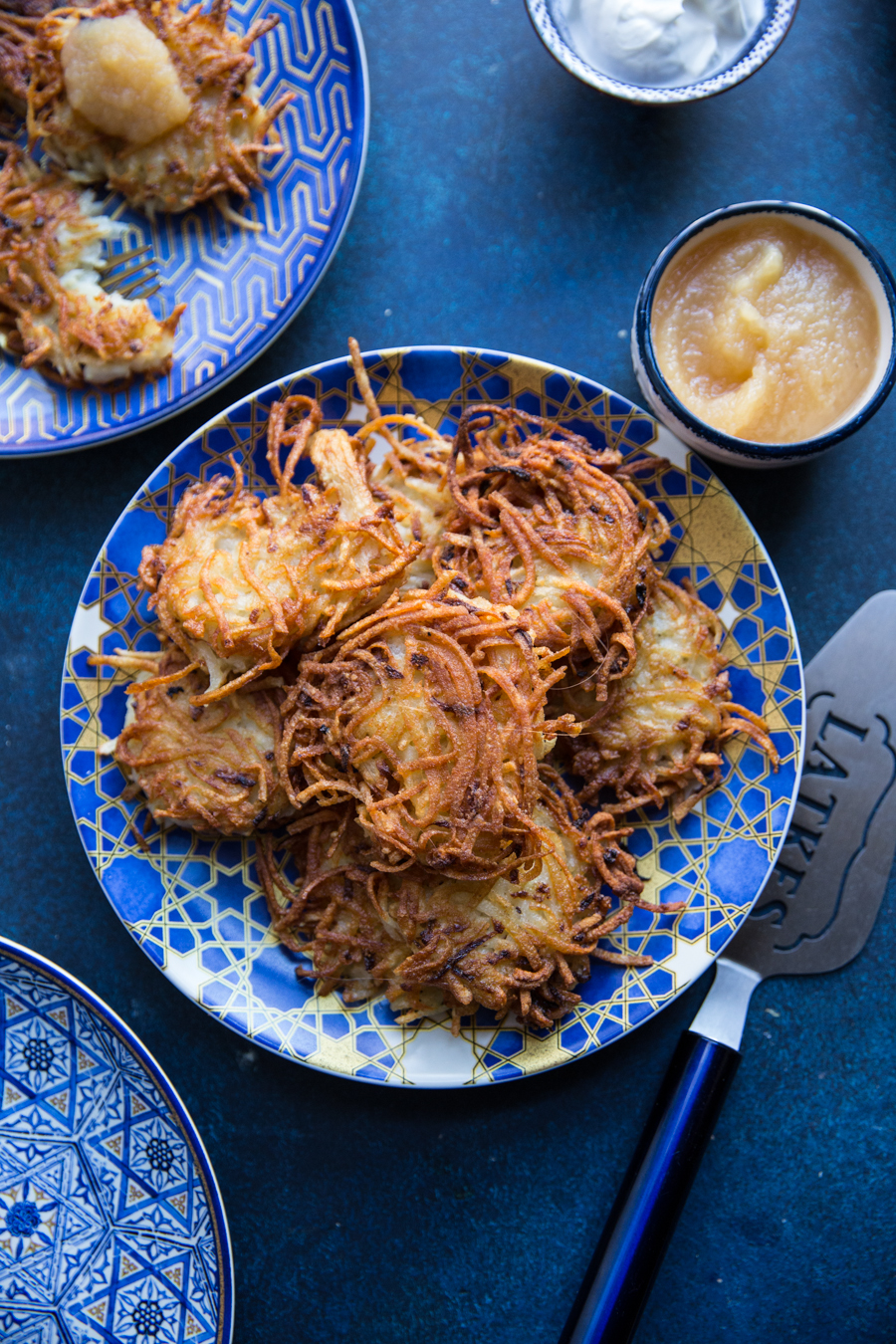 Prepare the latkes: Peel potatoes and immediately place in a bowl of water to prevent browning. Drain the potatoes and grate, alternating between the potatoes and onion, either by hand or with a shredding disc in your food processor. Place the grated potato and onion mixture into a large piece of cheesecloth or a kitchen towel. Wrap it tightly and squeeze out as much juice as possible into a large bowl. Let the juice sit for a bit so the potato starch settles to the bottom. Slowly pour the liquid out of the bowl (into the sink), leaving the potato starch in the bowl. Add eggs, matzah meal, salt, and pepper to the starch; stir to combine. Add the grated potatoes and onions to the bowl and stir to incorporate. Heat oil in a skillet and fry 1/4 cup of batter at a time until golden brown on both sides. 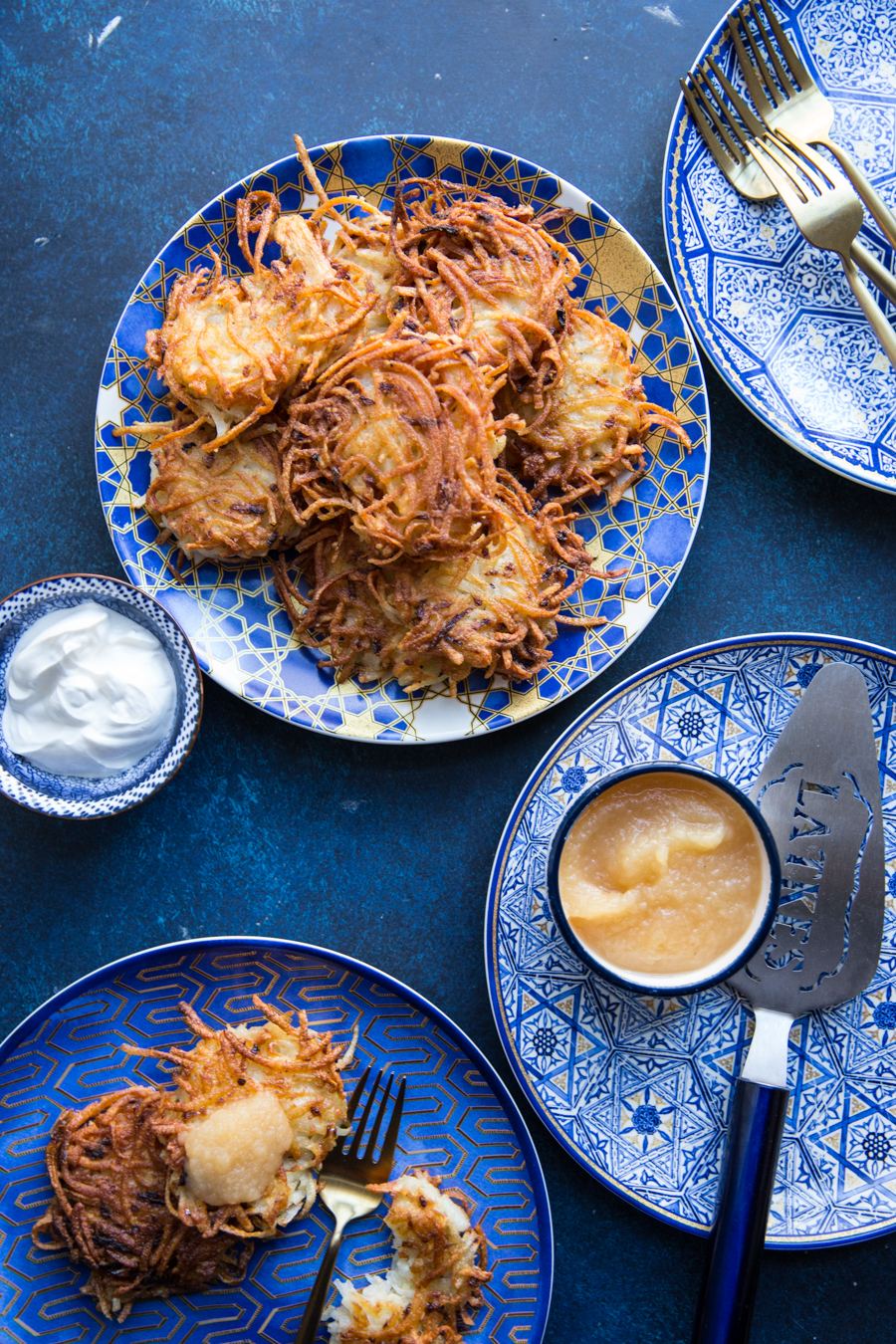