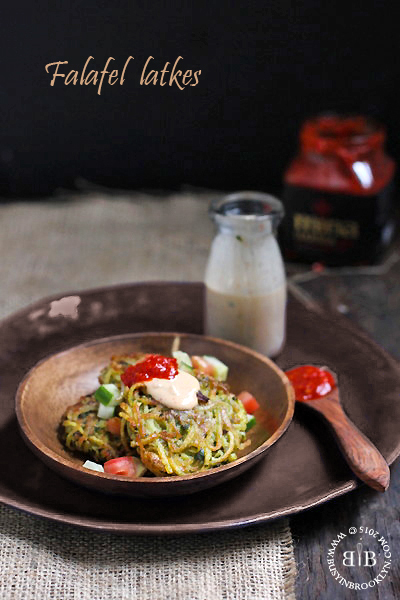 There really is no outdoing my poutine latkes from last year. The latkes went so viral, that I cooked them up for the Wall Street Journal and did a latke segment for The Meredith Vieira Show. HuffPost Canada went gaga over them and the rest is history. 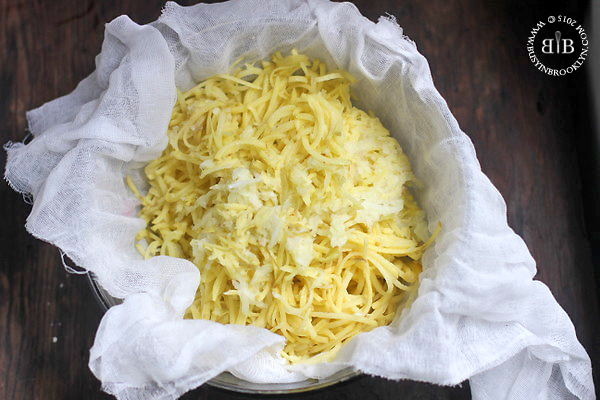 I’m not one to rest on my laurels so I had to really blow it out of the water this year. It’s a good thing I had an entire year to think about it! I knew I wanted to go in the Israeli direction, because my food has been really influenced by the amazing flavors and spices of Israeli culture and cuisine. And what’s more quintessentially Israeli than falafel? 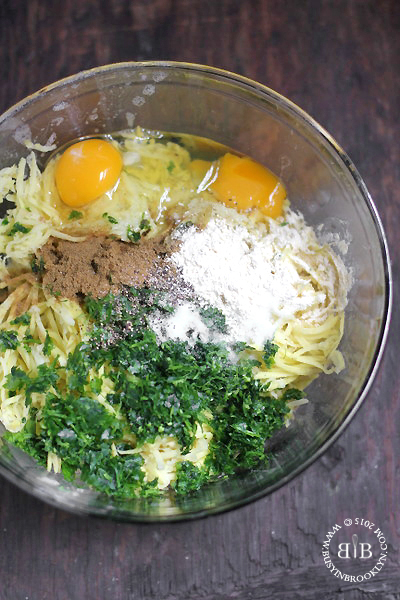 When falafel latkes, or as I coined them, FALATKES, came to me, I was beyond excited at the prospect of creating a beanless falafel dish! I prepared my batter, scooped it in the sizzling oil and my brain went crazy. Was I smelling latkes or was I smelling falafel?! I was smelling both!! 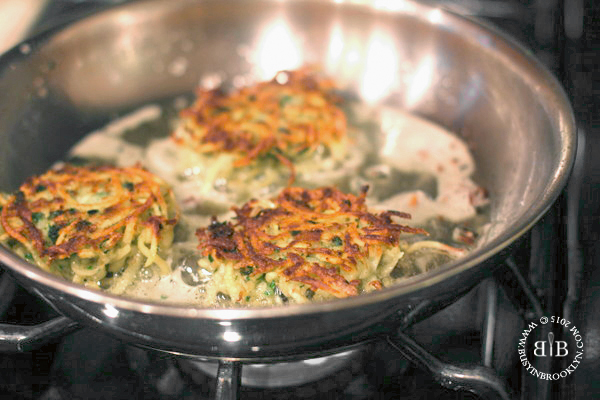 And then I took a bite of their crispy goodness and Oh. Em. Gee. I was eating potato latkes. And I was eating falafel. {MINDBLOWN} Poutine latkes – outdone. 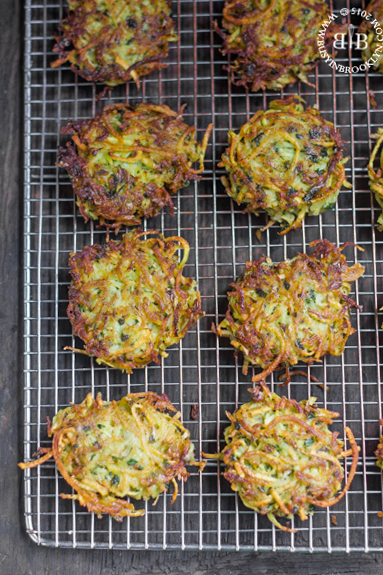 If Chanukah wasn’t my favorite holiday before, it is now! Not only was I born on the fifth night, but I got married on my birthday and as I celebrate my 35th birthday, along with my 13th wedding Anniversary, I will be munching on this deeelicious fried goodness. It’s going to be a very happy birthday indeed! 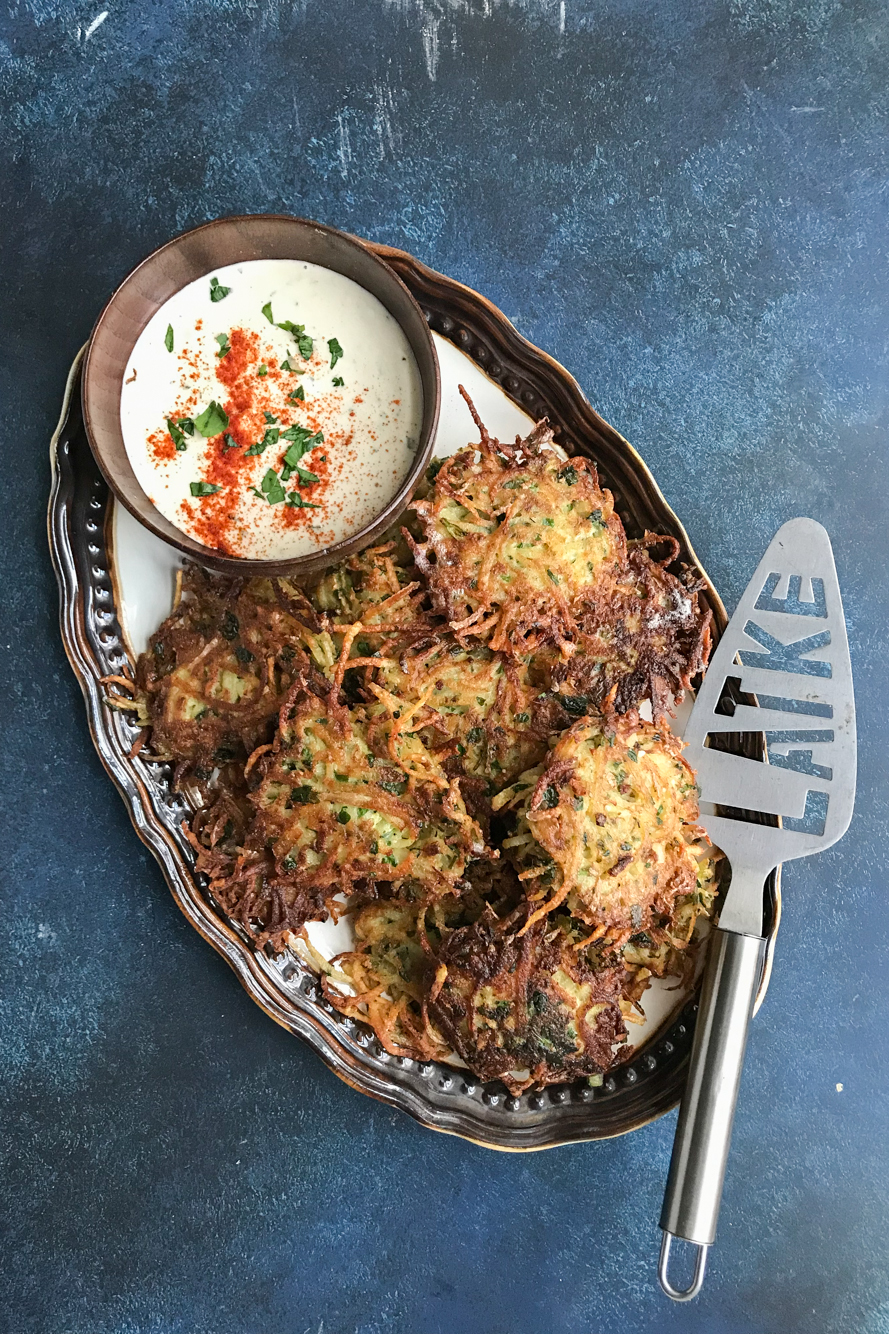 Now, when you create the ultimate Chanukah latke, you have to top it with the ultimate sauce. Tahini is my jam so I made it my favorite way – with delicious spicy harissa mixed in for a deep, rich and spicy flavor. I am legit obsessed with Mina harissa that I tasted at Kosherfest just a couple of weeks ago. It’s spicy, but it’s also kind of sweet, which is never something I expected to find in a harissa. It’s got such a homey small-batch flavor, I just want to slather it on everything! And don’t even get me started on their shakshuka sauce. I can’t wait to create some amazing recipes with it! 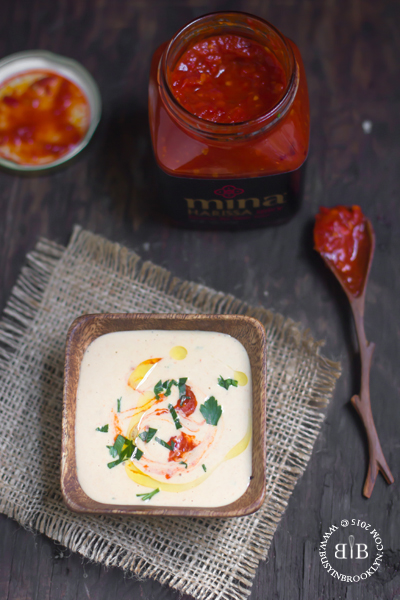 If you’re a fan of harissa, don’t forget to try my harissa whipped feta with za’atar eggplant chips. They’re perfect for Chanukah, when it’s traditional to eat dairy foods. You can even fry up the za’atar chips to really get into the Chanukah mood. My confetti latkes with harissa sour cream are another favorite and if you want to go healthy, definitely go for my cauliflower nachos with harissa cheddar sauce. Told you I love harissa. Of course, if you’re looking for other fun Chanukah recipes, don’t forget to check out my Chanukah category, as well as the Chanukah section in my new RECIPE INDEX!  You’ll find amazing appetizers and desserts that are perfect for you Chanukah party. 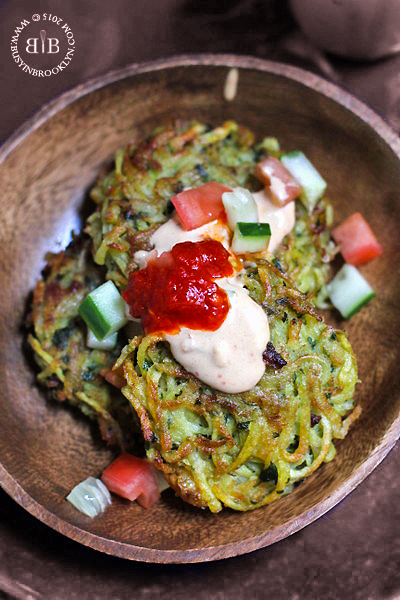 In the meantime, here are some great tips for making the ultimate crispy latkes!

1- Make sure to squeeze out as much liquid as possible out of your potatoes and onions using a cheesecloth or kitchen towel.
2- Use little-to-no flour to bind the mixture. The potatoes natural starch is usually enough to keep it together.
2- When the batter sits, it tends to get liquidy, so make sure to squeeze out as much moisture as possible before frying.
3- Use a 1/4 cup measuring cup to scoop out your batter. Pack the batter into the cup and place in the hot oil. Use the bottom of the cup to press down on the latkes, creating crisy, lacy edges.
4- Remove your latkes from the oil with a slotted spoon and place on paper towels to drain, but immediately remove to a rack so the latkes stay nice and crisp.

Peel potatoes and immediately place in a bowl of water to prevent browning. In a large bowl, combine eggs, spices, herbs, flour or matza meal and salt and pepper; stir to combine. Drain the potatoes and grate it, alternating between the potatoes and onion, either by hand or with a shredding disc in your food processor. Place the grated potato and onion mixture into a large piece of cheesecloth or a kitchen towel. Wrap it tightly and squeeze out as much juice as possible into a bowl. Let the juice sit for a bit so the potato starch settles to the bottom. Slowly pour the liquid out of the bowl (into the sink), leaving the potato starch in the bowl. Add the starch, grated potatoes and onions to the herb mixture and stir to incorporate. Heat oil in a skillet and fry 1/4 cup of batter at a time until golden brown on both sides. Drain on paper towels.

NOTE: If you don’t have garbanzo flour, you can use matza meal or regular flour. If you don’t like cilantro, you can just double up on the parsley.